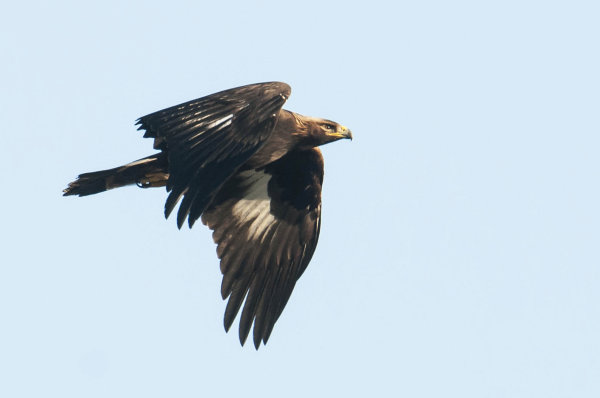 A Golden Eagle over Boundary Bay, BC Canada

A golden eagle — a rare visitor to a region known for its bald eagles — had birders all aflutter on New Year’s Day in south Delta.

“I have been here a couple of days for this guy,” said Vancouver’s Michelle Lamberson, taking her place in a line of photographers along 72nd Street near Boundary Bay. “I’ve got some decent shots.”

The juvenile bird sat like an ornament atop a large poplar tree on the edge of a golf course about 75 metres from the roadside.

Lamberson, who is director of flexible learning special projects at the University of B.C. and a birder for eight years, added: “I’ve not seen one in the Lower Mainland before. Bald eagles don’t like them.”

Mark Wynja, a birder for more than 40 years who works in a bird-supply shop in Vancouver, said the golden eagle rules the roost along the Boundary Bay foreshore. He watched as the raptor flew into a stand of red alders and scattered four bald eagles from their perches, although they later returned.

“He tends to be the dominant bird,” he said. “He’s tougher than a bald eagle, which is a glorified scavenger.”

John Gordon, a professional photographer from Langley, said the golden eagle showed up about two weeks ago and is dining on the vast flocks of waterfowl attracted to the bay and bordering farm fields. “It is one of those birds that we birders rarely see in the Lower Mainland,” he confirmed.

According to the B.C. Conservation Data Centre, golden eagles measure 76 to 102 centimetres in length, with a wingspan of 203 to 224 centimetres — on par with a bald eagle.

The golden eagle is distinguished by mostly brown plumage, a golden wash on the back of the head and neck, and a faintly banded tail, the centre reports. Unlike bald eagles, the lower legs of golden eagles are covered with feathers all the way to the base of their feet.

Immature individuals have white at the base of their primary feathers and a white tail with a dark terminal band. They can easily be mistaken for juvenile bald eagles, which do not develop their distinctive black and white feathers until about age five.

The diet consists primarily of small mammals such as rabbits, marmots, and ground squirrels, but can also include large insects, snakes, birds, and carrion. In areas such as Yukon, they are known to carry off the lambs of Dall mountain sheep from cliff faces.

The Committee on the Status of Endangered Wildlife in Canada says the golden eagle is “relatively rare, particularly in eastern North America,” but there is no “clear evidence” to show a decline in the species over the last several decades.